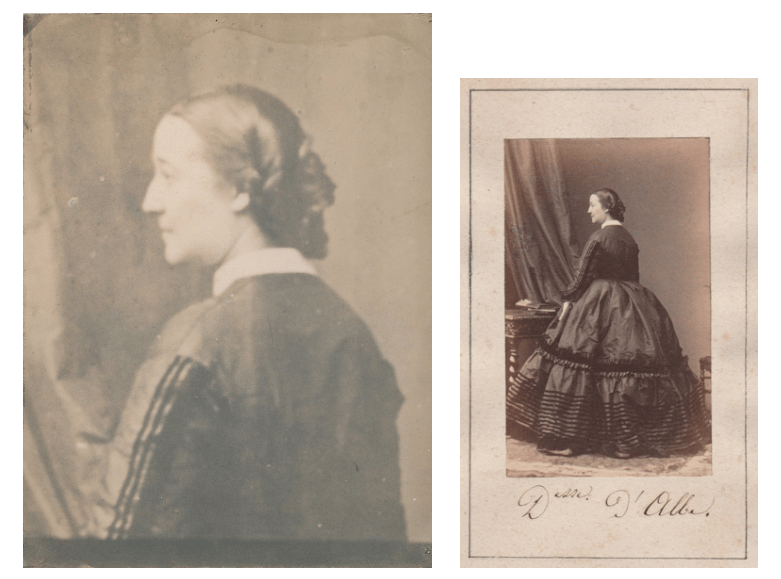 A rare piece of photographic history!

This salt print portrait of 'Pacca duchesse d'Albe' (1825-1860) is an early enlargement of a carte de visite portrait of her. Possibly by Disdéri or Edouard Delessert and Olympe Aguado.

Lot of 4 different prints from the same portrait:

The Empress Eugénie's sister, Maria Francesca Palafox y Kirkpatrick, was known as ‘Paca’ within the family. She became the wife of the Duke of Alba, the highest-ranking noble in Spain. She died in Paris on 16 September 1860. The Empress was away at the time on a state visit to Algeria and was only told of her sister’s death on the return journey to France. (Paul Frecker)

Due to this tragic event, we have a possible explanation for this enlarged portrait. The original full length portrait was made by Disderi ca. 1858. The empress may have ordered an enlargement. Of which this could be a witness.

This large salt print could also have been made by others than Disderi. The CdV of Eugénie d'Albe were commonly available. Viscount Olympe Aguado was an enlargement specialist. A technique on which he was possibly working with Edouard Delessert.
Did their friend, the Empress, ask them to enlarge a photo?
Or did Delessert and Aguado offered her this enlargement? This remains very possible. Indeed, we must not forget Edouard Delessert and Olympe Aguado have known the two Montijo sisters when they were young girls.

Nevertheless a very remarkable and rare piece of photographic history.